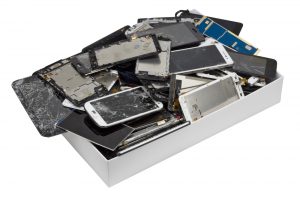 A Samsung lithium-ion battery manufacturing subsidiary is exploring investment in recycling companies to recover cobalt and other materials, as demand climbs for the metals.

Samsung SDI, which makes automotive and small-form lithium-ion batteries, is looking to solidify a long-term supply of cobalt amid skyrocketing prices and increased demand. The company plans to buy a stake in a battery recycling company, Bloomberg reported this week.

Although the manufacturer didn’t name the companies it has in mind, in a statement to Bloomberg it pointed to American Manganese and Umicore as two leading recycling companies.

American Manganese is focused on recycling large-format lithium-ion batteries from electric vehicles, but CEO Larry Reaugh told E-Scrap News the company is open to expanding its focus to mobile device batteries as well.

Umicore is a metals industry giant that began battery recycling operations in 2006.

Cobalt prices have shot to record levels in the past two years. Pure cobalt is currently trading for about $81,500 per metric ton, up from $55,000 in September 2017. It has more than tripled from about $24,000 per metric ton at the beginning of 2016, according to price-tracking website InfoMine.

The price rise is driven in part from battery makers moving away from the Democratic Republic of the Congo as a source for the material. Battery makers are looking for alternatives due to conflict and human rights abuses associated with its mining industry.